Next up for the Stags is an Emirates FA Cup Second Round clash with Sky Bet League One side Shrewsbury Town at Montgomery Waters Meadow on Saturday 30 November (kick-off 3pm). Here’s all you need to know ahead of the fixture…

Midfielder Neal Bishop could be in contention having returned to training earlier this week following tonsillitis and a back issue.

Both Danny Rose (hamstring) and Hayden White (leg) will not feature due to injury although the latter is just a week away from a return to the training pitch.

Frontman Craig Davies will also miss out as he continues to feature for the reserves ahead of an anticipated return to the first team in the next few weeks.

The Stags come into the game off-the-back of a 1-0 defeat to Sky Bet League Two leaders Swindon Town. They progressed to the Emirates FA Cup second round with victory over Chorley.

Shrewsbury were also beaten on their most recent outing, losing 4-3 to Bristol Rovers. They made it to this stage of the FA Cup following a 1-0 win against Bradford City in a replay.

We last faced the Shrews at back in April 2015 at One Call Stadium with the visitors winning by a goal-to-nil before going on to earn promotion to Sky Bet League One.

The referee for Saturday’s game will be Andy Haines, assisted by Steven Rushton and Conor Brown. Matthew Smith is the fourth official.

Mr. Haines last took charge of a Mansfield fixture earlier this season, as the Stags recorded a 2-1 victory at Walsall.

The Stags have received an allocation of 800 tickets for the match. 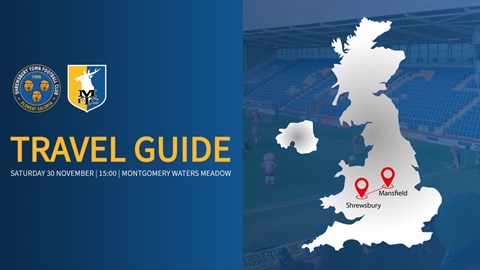 Parking at the ground costs £10 per car, although spaces are limited. Alternatively, vehicles can be parked for £5 at Meole Brace Park and Ride which is just a 10-15 minute walk from the ground.

The ground is situated next to the Meole Brace Retail Park where you can find a number of different food and drink options, including McDonalds, Pizza Hut, Costa Coffee and Starbucks.

The Wild Pig and Charles Darwin Pubs are a 10-15 minute walk away if you are looking for something a little stronger. There is also plenty of food and drink on offer inside the ground such as: pies, hot dogs, crisps and hot and cold drinks.

Fancy a flutter on the game? Place your bet using skybet.com/mansfield, and in the event of a loss, the Stags will receive 50% of your stake.

To add us on Snapchat, search ‘mtfcofficial.

It was an even first half in Shropshire that had an open feel to proceedings – despite neither side finding the net.

And despite the hosts being reduced to ten men after a rash Ollie Norburn challenge, first Laurent found the opener before Walker made sure of the victory in additional time.

The only alterations came on the substitutes’ bench as Mal Benning and Neal Bishop returned from suspension and injury respectively.

Mansfield began their latest FA Cup tie in sprightly fashion, knocking the ball around with intent, except it was the home side who mustered the first attempt at goal.

A delivery from the far side was met by the oncoming Dave Edwards but he could only guide his effort wide on the stretch.

The Stags responded immediately through the pace of CJ Hamilton – his low ball being diverted to safety before either Nicky Maynard or Jacob Mellis were able to capitalise.

And in the 10th minute, Conrad Logan produced a fantastic save to keep the scores at nil.

Edwards nodded back across the face of goal from a corner and as the ball seemed to be dropping in, the Mansfield ‘keeper clawed away on the goal line amidst a crowd of bodies.

Soon after, Mellis secured possession and delightfully picked out Andy Cook at the far post, whose subsequent header was collected by Max O’Leary.

The game continued to ebb and flow without and gilt-edged chances presenting themselves.

Samuel Ricketts’ side carved out the game’s next opportunity from a cross-field pass, however, the eventual delivery was released too far ahead of Jason Cummings.

At the conclusion of the first period, Maynard was set free down the left channel but his searching ball missed Cook.

It meant there was nothing to separate the sides heading into half time.

Into the second period and Fejiri Okenabirhie blasted an effort straight into the palms of Logan, who held firm.

And on 55 minutes, the Stags were somehow unable to convert a golden opportunity.

Maynard drilled one across the face of goal towards Cook, yet the no. 19 effort from almost point-blank range was turned behind for a corner.

There was to be another twist in Saturday’s contest, though, when Salop captain Norburn was shown a straight red for a late challenge on Mellis.

Josh Laurent had then ghosted into the Stags’ area unmarked, yet his glancing header was miscued and looped beyond the bar.

Ten-man Shrewsbury still posed a threat with the backing of their home support and the 3,678 instead watched as Donald Love fired wide.

Dempster rolled the dice with a double substitution – Benning and Omari Sterling-James – in an attempt to sneak into the third round with a late, solitary goal.

However, it was instead heartbreak for the visitors.

In the 88th minute, Laurent made use of a kind deflection that wrong-footed Logan and the Shrewsbury man was able to sweep home into an unguarded net.

Mansfield were given five additional minutes to therefore force a replay through an equaliser, but it never arrived as the Shrews found another.

Substitute Walker was set clear by Dan Udoh and made no mistake when rounding Logan to give his side daylight in the dying embers.

Mansfield’s attentions will quickly turn to Leasing.com Trophy action as they travel to Port Vale on Tuesday 03 December.