Next up for the Stags is a trip to face Plymouth Argyle in Sky Bet League Two on Saturday 18 January (3pm). Here’s all you need to know ahead of the game…

Midfielder Willem Tomlinson is likely to miss the fixture due to a groin injury, while wing-back Kellan Gordon (back), will be absent.

For the Pilgrims, Callum McFadzean is expected to miss the game because of a knee injury.

The Stags suffered a disappointing defeat last time out, losing 4-3 to promotion-chasing Forest Green Rovers despite making it 3-3 through Nicky Maynard in the 90th minute.

Plymouth have won four of their last five league games, recording a 3-0 victory away at Carlisle United on Saturday.

We welcomed the Pilgrims to One Call Stadium in late September, where an early Conor Grant stunner separated the sides.

The referee for Saturday’s match will be Trevor Kettle, assisted by Steven Plane and Paul Hobday. The fourth official will be Savvas Yianni.

Mr. Kettle last took charge of a Stags’ fixture in our 4-0 victory over Morecambe at One Call Stadium in April 2019.

The Stags have received an allocation of 300 tickets for the fixture. 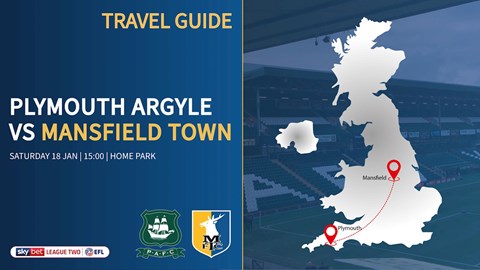 Home Park has a very large car park just outside the ground, which is free to use. Although it is free to use, supporters should be aware that the car park can fill up on matchdays, so are advised to arrive in advance.

Be very wary of parking on streets in the nearby area, as some require parking permits.

There are a number of interactive catering kiosks situated throughout the Home Park stadium, offering the usual range of food and beverage options.

Outside the ground, around a ten-minute walk away, is the Britannia, which is a sizeable Wetherspoons outlet. Near to the pub there is normally a van selling pasties. Around a 15-minute walk away from Home Park, going across the Park, is the Hyde Park Social Club, which welcomes visiting supporters. Otherwise, alcohol is available within the ground.

Mansfield Town were dealt a 3-1 defeat by Plymouth Argyle despite creating a number of chances at Home Park on Saturday afternoon.

The Stags were made to rue several missed opportunities in the early exchanges when Niall Canavan popped up to open the scoring just minutes before the interval.

Antoni Sarcevic’s spot-kick then doubled Argyles’ lead prior to an incredible Andy Cook volley that looked to have sparked life into yet another comeback this term.

However, it proved to be one step too far as Ryan Hardie sealed the win with a calm finish late into the contest.

Graham Coughlan named two changes from his side’s last outing as Krystian Pearce returned at the heart of a back-three, while Hayden White replaced James Clarke who dropped to the bench.

Indeed, there was also a spot amongst the substitutes for new signing Harry Charsley.

It proved to be an all-guns-blazing approach by Mansfield that so nearly paid dividends in the early stages.

Initially, Alex MacDonald’s carefully weighted ball was met by CJ Hamilton who could not divert his header beyond the sprawling Alex Palmer. The winger was then presented with a second opportunity but had possession stolen as he looked primed to net.

The hosts sought to respond but faced a tightly-packed defensive line – before the amber and blue worked another fantastic opening.

Neal Bishop spotted the run of Nicky Maynard up top, and while the pass was taken in stride, Palmer again stood firm to this time deny the No. 11’s attempted dink.

It was Hamilton who repeatedly looked most threatening but when slid through by Danny Rose, he struck his effort the wrong side of the upright.

He would become even more frustrated, though, as he swept at MacDonald’s low cross without making enough contact to find the target.

Down the other end, the Pilgrims were looking to gain a foothold in the contest and almost did just that with Tyreeq Bakinson’s volley rebounding against the woodwork.

And with two minutes remaining in the first period, Ryan Lowe’s charges made their mark on the scoresheet.

Canavan was allowed to ghost towards the back post to meet George Cooper’s delivery and the subsequent header broke the deadlock in Devon.

Into the second period and Byron Moore flashed his low effort wide from a tight angle before Mansfield were dealt an injury blow.

White, who had only just been restored to the starting line-up, pulled up clutching the back of his leg and was immediately swapped out for Clarke.

Minutes later, it was yet another opportunity that somehow went begging for the away side. Mal Benning’s flicked possession towards Maynard but his measured, side-footed punt was cleared on the goal line by Argyle goalscorer, Canavan.

The Stags’ task was then made even harder when Matt Preston was adjudged to have nudged Joe Edwards to the ground inside the area.

Sarcevic grabbed hold of the ball, placed it on the spot and found the top corner with consummate precision.

Although, in an extraordinary 60 seconds, Coughlan’s second substitution proved to be a stroke of genius in sparking a potential fightback.

Rose made way for Cook and with his first two touches he caught Palmer unaware to halve the deficit with an unbelievable volley, clipping the underside of the bar on its way home.

Mansfield were continuing to search for pockets of space that may lead to an equaliser, including several deliveries via Hamilton that the Pilgrims were able to clear.

A fine save by Bobby Olejnik then kept his side within touching distance on 85 minutes as he touched Bakinson’s long-distance drive above the bar.

However, the hosts rubber-stamped all three points in the first minute of additional time.

Substitute Hardie was released by an instinctual pass and tucked home beyond Olejnik who could do very little as he rushed out to close the angle.

The Stags will return to Sky Bet League Two action on Saturday 25 January when Bradford City are the visitors at One Call Stadium.