Next up for the Stags is a trip to face Cambridge United on New Year’s Day in Sky Bet League Two (3pm). Here’s all you need to know ahead of the fixture…

Wing-back Kellan Gordon will miss the game due to a back issue, while versatile midfielder Conor Shaughnessy is also sidelined with a hamstring injury.

Defender Ryan Sweeney, who was a substituted in Sunday’s match at Bradford, will continue to be assessed ahead of the game.

For the U’s, Jabo Ibehre, Gary Deegan and Kyle Knoyle are likely to miss out.

After three successive draws, the Stags were beaten 2-0 away at Bradford City on Sunday. Two James Vaughan penalties decided a tight affair in West Yorkshire.

Cambridge recorded a victory last time out, ending a run of three games without a win. On-loan Tottenham man Jack Roles netted the only goal in a 1-0 home victory against Morecambe.

We last faced the U’s at One Call Stadium earlier this season, a game that ten-man Stags lost 4-0.

The referee for Wednesday’s game against Cambridge will be Neil Hair, assisted by Gareth Viccars and Garry Maskell. The fourth official will be Gregory Read.

The club has received an allocation of 770 tickets for the fixture. Tickets are no longer available to purchase from One Call Stadium but can be purchased from Cambridge on the day of the fixture at the following prices:

*Valid NUS card must be shown
**Must show valid ID 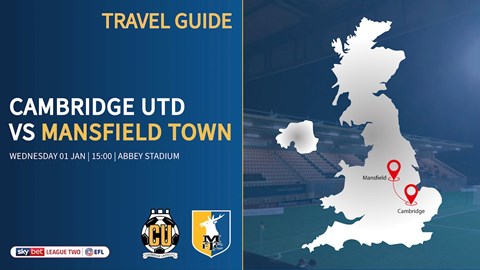 There is no parking at the ground. On-street parking is recommended by the club on Ditton Walk, Coldham's Lane and Whitehall Road.

The Supporters' Club at the ground, with a £2 entrance fee, allows a few away supporters in. There are few pubs in the vicinity of the ground, but the closest are the Wrestlers and the Tram Depot. Within the ground there are several Tea Bars serving the usual food and drinks.

The striker twice restored parity after solitary goals from Harvey Knibbs and Greg Taylor had given the U’s a lead on two separate occasions.

And after Reggie Lambe was brandished two yellows in quick succession, the Stags made their one-man advantage count as Maynard wrapped up his hat-trick alongside all three points.

The injured duo of Ryan Sweeney and Will Tomlinson were replaced by Krystian Pearce and Neal Bishop, while Jacob Mellis returned in Otis Khan’s place.

There was also a straight swap in attack – Maynard for Andy Cook – while Hayden White featured for the first time in almost three months.

Inside the first minute at Abbey Road, CJ Hamilton was presented with a difficult chance but was unable to keep his sweeping effort below the crossbar.

But only two minutes later, the hosts took the lead.

Harrison Dunk received possession on the left channel and was able to spot Knibbs, unmarked in the centre, who stooped low to nod his side into the lead.

The U’s soon found themselves clear of the Stags’ defence but Conrad Logan’s sprawling save was enough to divert Sam Smith’s effort against the upright.

Mansfield were intent on restoring parity. Maynard first showcased his acrobatics to slice a bicycle kick into the grasp of ‘keeper Callum Burton, before Hamilton’s drive was beaten clear.

It proved to be an end-to-end first period as Colin Calderwood’s men galloped back down the other end. Pearce was on hand to deny Paul Lewis a sight at goal prior to Neal Bishop having possession nicked off his toe inside the area.

Maynard seemed to be growing into the contest – much like the away side overall – and came close to finding an equaliser.

His superb touch allowed him to skip past George Taft, yet his first-time effort was well-handled by Burton.

However, the hosts' ‘keeper could do little but watch as the striker was teed up to bundle over the line in the 36th minute.

Danny Rose was alive to Mal Benning’s cross and his knock-back across goal was gladly accepted by Maynard, who tucked away with ease.

Unfortunately, the Stags were only level for a matter of moments.

Jack Roles took charge of his side’s dead-ball situation and watched as his curler rebounded against the base of the post, fortunately into Taylor’s path to stroke home.

It was harsh on Coughlan’s charges – who subsequently found themselves behind at the break.

Into the second period and Mansfield were seen to be asserting their dominance. Several teasing deliveries were defended instinctively as they harried after their second equaliser.

And with just over half an hour remaining, the Stags were handed a boost as the hosts were reduced to 10 men.

Lambe picked up his initial yellow card for a challenge in the centre of the park, only two minutes before his second after chopping down White as he looked to surge into the area.

Hamilton then twisted and turned away from his marker to feed Rose, whose dragged effort brushed the side netting.

The No. 22 posed a continual threat and his deflected cross had to be sent behind by Burton as it threatened to drop below the bar.

Soon after, though, Hamilton would have his reward for his persistence.

He latched another inch-perfect pass from Benning and sent the ball towards Maynard – perfectly placed to net his second of the afternoon.

It was almost three in quick succession for visitors as Rose lurked, yet his deft touch towards the far post was pounced upon by Burton.

Although, it would not be long before the Stags carved out another chance to storm ahead for the first time in Cambridgeshire.

Pinball amidst a crowd of bodies eventually saw possession fall towards Maynard inside the area, who completed the turnaround by heading past Burton from point-blank range.

Substitute Cook had the chance to secure the victory with a late, late chance, but he was unable to guide a delicate chip towards its desired target.

The Stags were made to dig deep for their three points – including six minutes additional time – but held on for their first victory under Graham Coughlan.

And his side are back in action on Saturday 04 January when Grimsby Town visit One Call Stadium.