Next up for the Stags is a trip to face Port Vale for a Leasing.com Trophy knockout stage clash on Tuesday 03 December (7.45pm). Here’s all you need to know ahead of the match…

The Stags will be without striker Danny Rose for the match as he continues his recovery from a hamstring injury. Manager John Dempster says that Rose is expected to return to training later this week.

The game will also likely come too soon for fellow frontman Craig Davies who will continue to feature for the reserves ahead of a return to the first team in the next few weeks.

Wing-back Hayden White will miss the clash due to an ongoing leg injury. The 24-year-old is expected to make a return to training in the next week or two.

The Stags bowed out of the Emirates FA Cup on Saturday following a 2-0 defeat against Sky Bet League One outfit Shrewsbury Town.

The amber and blue made it to the next stage of the Leasing.com Trophy last month with an impressive 2-1 win away at Burton Albion.

We travelled to face the Valiants earlier this season, recording a 2-2 draw in September. Wing-back Kellan Gordon and striker Danny Rose were on target for the Stags.

The referee for Tuesday’s match will be Marc Edwards, assisted by Anthony Moore and Billy Smallwood. The fourth official will be Steven Copeland.

The Stags have received an allocation of 530 tickets for the fixture.

Full ticket information can be found by clicking here. 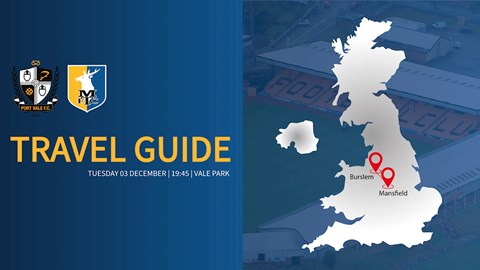 Parking for visiting fans is directly in front of the Hamil Road Stand, which is accessible through Gate C. Parking prices are £5 for cars, £16 for minibuses and £25 for coaches.

The Bull’s Head in Burslem town centre is a Titanic Brewery pub which welcomes away fans. Just outside the away turnstiles there is a club bar called the ‘Vale Social’ which allows all home and away fans in for free. The stadium has kiosks in all of the stands, with hot and cold food available, as well as a range of alcoholic, soft and hot drinks.

Fancy a bet on the game? Place your bet using skybet.com/mansfield, and in the event of a loss, the Stags will receive 50% of your stake.

Can't make it to the game? You can watch the game live on iFollow Stags for just £10! Click here to purchase your match pass.

To add us on Snapchat, search ‘mtfcofficial.

Goals from CJ Hamilton and Omari Sterling-James were not enough as Mansfield Town were eliminated from the Leasing.com Trophy on penalties against Port Vale.

The Stags found themselves ahead on 50 minutes through Hamilton’s first of the season but the home side turned the tide with Rhys Browne and Jake Taylor.

And while Sterling-James’ late, thunderous effort forced a penalty shootout, the Valiants emerged victorious with a perfect run of four spot-kicks.

The teamsheet signalled six changes from the weekend’s Emirates FA Cup clash at Shrewsbury as John Dempster looked to guide his charges to the next stage of the competition.

There was little to separate the sides in the early exchanges before Ryan Lloyd lifted his first-time effort above the bar.

Mansfield sought to work their way behind the Vale defence with Alistair Smith’s over-the-top ball, however, it skipped away on a frosty surface before anyone could latch on.

Mark Cullen then peeled off into space but skewed his right-footed strike considerably wide.

Soon after, a neat Mal Benning ball set Hamilton away down the left channel, but the subsequent pass was just slightly behind the advancing Otis Khan.

Lloyd was presented with another presentable sight at goal, past the half-hour mark, but again was unable to keep his effort low.

The knockout contest began to heat up towards the conclusion of the opening period with Hamilton twice beating his marker.

On the first occasion, a low delivery evaded Alex MacDonald at the far post before the second was nodded in the grasp of the hosts’ ‘keeper by Andy Cook.

The Valiants responded quickly, though, when Cullen stung the palms of Bobby Olejnik from inside the area.

Frenzy ensued in the dying moments of the first-half but Mansfield survived and it meant the scores were level at the break.

Yet only seconds from the restart, Mansfield could have found themselves ahead.

Cook latched onto a loose ball between Vale’s centre-half pairing and with the decoy run of Hamilton, he curled into the midriff of Scott Brown.

Soon after, the striker did use his teammate’s run and it resulted in the opening goal.

The no. 22 had time and space inside the hosts’ penalty area before being fed by Cook to fire home with expert composure.

John Askey’s men regrouped and signalled their intent for an instantaneous response – Browne dancing his way forward only to be thwarted brilliantly by Olejnik.

The forward though did manage to restore parity in the 64th minute.

Making use of a loose touch by Smith in a dangerous position, the Vale man rifled home without needing a second invitation.

Mansfield continued to knock the ball around with purpose as they probed for a winner with less than 10 minutes remaining.

However, it was unfortunately the home side who found the third goal on Tuesday evening.

Taylor – on loan from Championship side Nottingham Forest – brought down David Worrall’s cross and fired underneath Olejnik from close range.

It seemed to be the decisive moment in Staffordshire, but there was to be another twist that arrived in the second minute of stoppage time.

Substitute Sterling-James made inroads down the right channel and fired a tremendous effort into the far corner, levelling up the scores and forcing the tie to penalties.

The hosts netted all four of their 12-yard efforts while only Jacob Mellis and Jimmy Knowles were on target for the amber and blue.

Next up for Mansfield is a return to action in Sky Bet League Two, as they welcome Cheltenham Town to One Call Stadium.